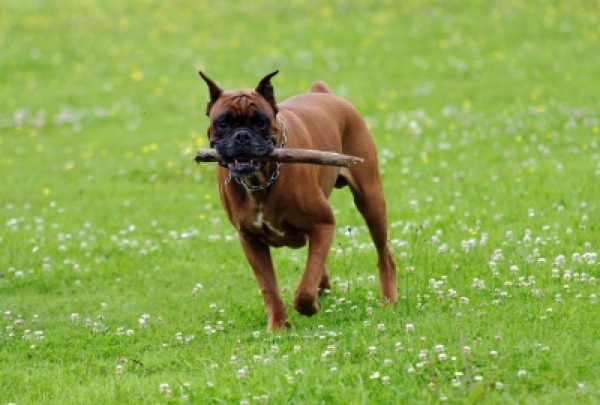 Does your dog like to fetch sticks and chew them up?

Well you might want to think twice about letting them play with sticks again!

Vets in Cheshire on average treat 2 dogs a month with serious stick injuries, which actually require treatment under general anaesthetic or sedation!

What Injuries Can Dogs Get From Sticks?

There are various different injuries that dogs can sustain from sticks, with the most common injury being caused when a dog runs at a stick that is stuck in the ground. The stick can get forced down under its tongue, cutting it, or even worse, it gets forced down the dogs throat, lacerating the throat or even causing damage to their vocal cords.

A splinter from the stick can get caught along the roof of a dogs mouth, getting jammed in to each side, causing the dog a lot of discomfort. Dogs don’t have hands like we do so they probably won’t be able to get the stick out themselves.

When chewing a stick, a splinter may pierce a dog’s mouth or throat and then get trapped. This can cause an infection, which if left untreated, in extreme cases can actually cause death.

How Do I Know If My Dog Has Sustained A Stick Injury?

With some dogs it may be obvious that they have sustained an injury from playing with a stick.

You may see some blood coming from their mouth, on the stick itself or on their toys.

They may be pawing at their mouth whilst making distressed noises.

They may be coughing or trying to hack something up constantly.

But some dogs have a very high pain threshold, they may only let out a small yelp and then continue playing, so you may not even be aware that your dog has hurt themselves, so the signs may be more subtle.

They may not be eating or drinking as much as they normally do, or they might not even be eating anything at all. If a dog doesn’t eat for a few days, this can cause serious health problems.

They might just not seem their normal selves. You might have a very bouncy dog, who stops bouncing around as much and just wants to be left alone? You may have an older, quieter dog, who normally likes to sleep on your lap, but they are choosing to go and sleep in their basket instead.

These are all signs that are cause for concern.

What Should I Do If I Suspect My Dog Has A Stick Injury?

If you suspect that your dog has sustained a stick injury then the best thing to do is to take your dog to the vets to get checked out.

The vet will either prescribe some antibiotics or will book your dog in to be thoroughly examined under sedation or general anaesthetic. They will look for any obvious signs of trauma caused by the stick and will also look out for splinters.

In extreme cases, expensive £1000 a time CT scans can actually be used to look for any splinters that might be stuck, as they rarely show up on a normal x-ray.

Our own dog Dillon actually had a stick injury recently. He had been on lead walks for about 3 weeks as he had a leg injury and he was absolutely fed up. We thought we would let him off for a few minutes and he went to chew a stick. We thought he would be fine just having a chew for a few minutes but he was playing with one and he suddenly yelped. We thought nothing of it a first, but the he did it again, and it was quite a loud yelp.

We took him home, and he seemed ok, but we heard him yelp a couple more times, and we realised that he had obviously injured his mouth with the stick.

We took him to the vets the next day, and although she couldn’t really get to open his mouth as he was being defensive, she suspected a stick injury so she prescribed some antibiotics, and told us to bring him back if he didn’t get any better in a few days.

Luckily, the antibiotics did the trick, and we learnt our lesson, we won’t be letting Dillon play with sticks ever again!

Make sure you do the same.

Let them chase a ball instead, or try the new wood scented nylon bones.