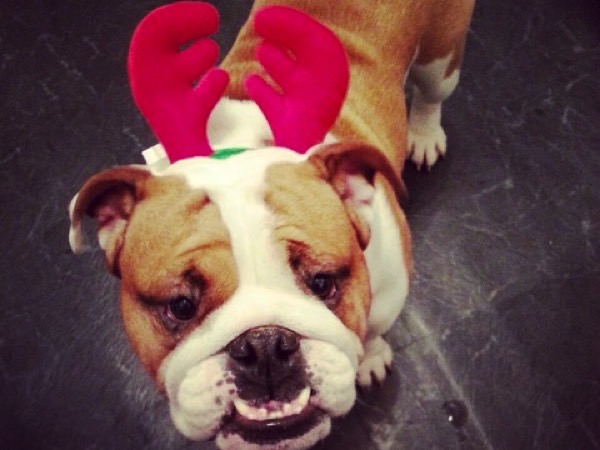 It’s not a topic that many people find easy to discuss but recently, many of our friends have come across new pets in their life purely by accident as a result of neglect. One of our friends, Kim, has adopted a kitten after finding it underneath a car tyre in the middle of the night, in the midst of winter, after no one came forward to claim her. In fact, three more kittens with similar colourings were found in a taped-up cardboard box just one street over from where this one was found. It appears that they had all been abandoned at about nine weeks of age.

Another friend of ours, Lorraine, has recently adopted a four year old English bulldog called George. After coming across the pooch on a walk one evening, the owner’s admitted that they were getting fed up of their four-legged friend, and would happily give it up for a ‘few hundred quid’.

Being concerned, Lorraine went around to the dog owner’s home to enquire about their offer of adopting the pup, and found the poor thing cowering in a cold conservatory, without any room to roam around in, minus any toys, blankets, beds, fresh water…

It broke their heart to see such a beautiful dog in such a sad state and they promptly handed over £400 (plus a shed load more in vet’s fees) and adopted poor George the bulldog for their own.

You’ll be happy to know that George is doing fine and well and as you can see, he very much enjoyed his first Christmas with his new family complete with his very own dog bed, blanket, treats and more toys than he could ever get bored of! Plus antler head-dress of course!

Sadly, not all stories like this have such a happy ending. Not too long ago, another of our friends, Callum, came across a tiny Alsatian puppy in an alley way after it had escaped. Following the sounds of small barking noises coming from not far away, they found the garden in which the pooch belonged and also its puppy siblings, all of which were in a terrible state. Their mother hadn’t been fed in weeks and the pups hadn’t been feeding properly. Out of the four puppies that were found, all four of them died and the mother has since passed away despite the treatment she had been receiving. The dogs were confiscated from the owners and criminal charges are now going ahead.

These stories are real life stories and they are awful to hear, aren’t they? The sad news is that so many people don’t really know what can be done about neglected pets, frightened to come forward in case the owners retaliate and something bad happens. If you suspect that an animal may be being mistreated, here’s what you should do…

If you see abuse or cruelty…

If you physically see someone harming their pet in anyway, don’t go with your first instinct and jump in between the two. Even when animals such as dogs are being mistreated by their owners, they are still very loyal creatures and will defend them against the likes of someone like you. The dog doesn’t understand or appreciate that you are trying to help, they just think you are trying to attack their owner so keeping a ‘safe distance’ is probably a good idea.

Seeing cruelty to animals IS an emergency and you should dial 999. You would do the same if a person was being attacked by another person, so why wouldn’t you for an animal?

At the same time, you don’t know whether or not the owner will retaliate with your intervention. As much as you want to keep the animal safe, you need to ensure you are keeping yourself safe too.

If you suspect neglect, abuse or cruelty…

If you don’t have any concrete evidence that an animal is being either abused, neglected or subjected to cruelty, that doesn’t mean it isn’t going on and you should still make someone aware that you think it is happening.

If you can, make notes of what is going on. This might include times that you think you can hear the pet being physically attacked, when the pet is being shouted at, etc. If you don’t think a dog is being taken for walks and doesn’t have a back yard big enough to move around in, state that you haven’t seen the pet leave the house for x amount of days. The aim of the game is to get enough evidence behind you to support your allegations. They are pretty serious allegations to make so you want to be sure it is actually happening before you start throwing around accusations. Sometimes not everything is quite as it seems…

The RSPCA is the go-to charity when you think an animal is being neglected and to make life easier, we’ve even got the phone number for you – 0300 1234 999. This phone line is open 24/7, 365 days a year so if you are in any doubt, give them a call. It’s always better to be safe than sorry, right?

You WILL need to give your contact details to the RSPCA to avoid malicious and needless claims, but all information you hand over to them will be completely confidential.

Sometimes, just sometimes, stories do end well like George the English bulldog and Choo, the little lost kitten. Sometimes the situation can be resolved by simply rehoming a stray kitten yourself or handing over a few quid to ensure the safety of an animal that you know you can give a much better and happier home to. Sadly this can’t always be the case and we would always urge you to consider your own safety before making any decisions. If in any doubt, just leave it to the professionals and give the RSPCA a call, or simply dial 999.