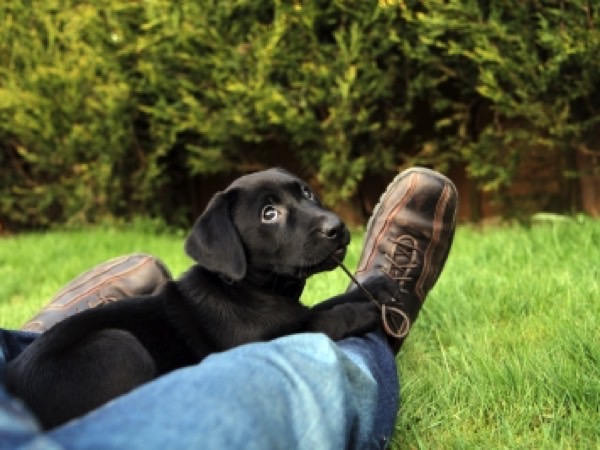 One of the worst stages you’ll ever go through as a new puppy owner is the chewing stage and trust us when we tell you that it will drive you crazy. Sadly, this is a pretty common problem among young dogs and although some breeds are worse for it than others, it’s something you’ll probably need to deal with at some point of your pooches life.

At about five months old (although it can happen between three and a half months to six months), your dog’s baby teeth will be replaced by their permanent, adult teeth and during this time, they are likely to be in a bit of pain much in the same way as a baby suffers when they are teething. Their gums will be irritated and sore and for the most part, chewing stuff just helps to soothe the pain.

As the dog gets older, the teething thing will go away and the chewing should stop but if you don’t get the problem under control from an early age, you may find that it becomes a more long-standing issue.

Of course, teething isn’t the only reason behind your much loved pooch chomping down on everything you own. Boredom could be the reason behind it, as could behavioural problems. It could also be an attention-seeking thing – if you aren’t pampering your pet enough, he’ll soon play up to make sure you’re aware of it!

Thankfully, with the right training and knowledge, you can stop your puppy chewing fairly easily. It just takes a bit of patience!

Here’s how to stop your puppy chewing:

1 – Put your own things away

OK so it sounds simple enough but to some extent, if your puppy is chewing your belongings, it might just be a sign that you need to put stuff away! Don’t leave your phone charger hanging out of the plug. Don’t leave your clothes all over the floor. A good way to look at it is this – if you don’t want something to end up in your pup’s mouth, don’t make it accessible!

2 – Make sure your pup has enough toys

If he has toys that he can actually chew on, he’ll be less inclined to chomp down on your things, especially when you train him to do just that. There are plenty of chewable toys on the market these days and with some of them, treats can be inserted that need coaxing out which gives them something to do while creating a learning environment at the same time. Whenever he chews on your things, you tell him “No!” in a stern voice and place his own chew-toys in front of him. Eventually he will pick it up and your belongings will be safer!

3 – Does your dog get enough attention?

As we’ve suggested, sometimes the chewing activity could be down to an act of attention-seeking. If you’re not interacting with your pup, he’ll get lonely and he’ll do whatever it takes to catch your eye even if it means getting himself into trouble.

It’s the same kind of thing as a bored child – the child will play up and so will the dog. Once you play with them for a little while they soon start behaving again.

These are great for when your puppy is teething so if you have any old t-shirts, towels, wash cloths or anything like that, soak them in cool water and provide them to your pooch to munch down on. The cool water will sooth his aching gums, and the fabric will stop him from doing the same thing to your own clothing.

If all else fails, try a deterrent-spray to stop your puppy from eating your stuff. There are a couple of decent brands on the market that you should check out. Bitter Apple is a good one to use too. If it tastes bad, they won’t be as inclined to chew it and some of your stuff will be a lot safer.

Learning how to stop your puppy chewing is a good way to train your pet well and make sure they mature with good manners. Let’s hope you’ll be lucky and its just a phase he’s going through!